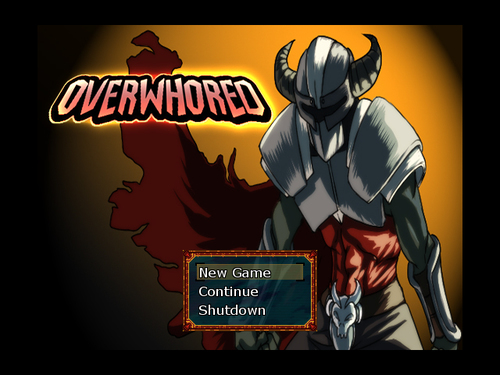 Overwhored is a pornographic parody of the Overlord series of games.
The game is a classic RPG in the vein of Final Fantasy or Chrono Trigger.
In it you play the resurrected Overmind, out to conquer the world and capture all heroines.

Patch:
1: The game’s story is basically finished here. This includes the final boss and an entire complete chapter.
2: The final chapter doesn’t have one dungeon. It has FOUR. Yeah, four separate dungeons! Each is pretty different from the last and has some wildly different mechanics as well as a unique boss.
3: The Tower Mistress gets a full sex scene in this chapter.
4: So does Rubati.
5: Promised features are now in the game! Those repeatable sex scenes you’ve been asking for? Go to the crown in your private quarters and you can relive them all! The teleport system is also done! Not fully fleshed out but in “functional framework” mode are taxes/orgasmic energy collection at the end of each chapter, The Orb of Dominion’s upgrade system, and the Arena where you can battle for items! They’ll be fully fleshed out and tested next month but for now they ARE at least functional.
6: Tons of new battle images for monsters. Almost all the monsters in the game and characters have unique art now!
7: Heroine backstories! As mentioned above, there are some (brief) flashbacks to what actually made them heroes in the first place.
8: Innumerable small changes! New sex scenes implemented!