Description:
A part of the main “Iris Quest”, a small mini-game which we estimated to make for two weeks maximum. Just to entertain people waiting for the big game.

Changelog: “The Goblins’ Curse” v. 1.0.1
Fixed:
– the bug on opening the configuration from start menu.
– when playing the game in Russian, the scene on receiving card 13 was shown in English.
– the bug on switching English/Russian for card gallery in main menu.
– Foo’s double attack alert was shown only during the attack itself.
– in some situations a defense boost was not reset after performing defense.
– the logical conflict between Trap Master’s and D’jasa N’bada’s plot lines.
– the bug on tentacle monster encountering guroblins.
– in some cases overfilling the inventory with quest items made impossible to continue the game.
– a few typos. 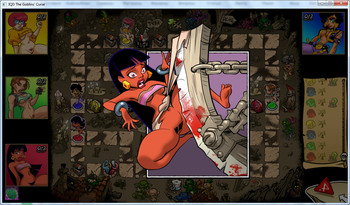