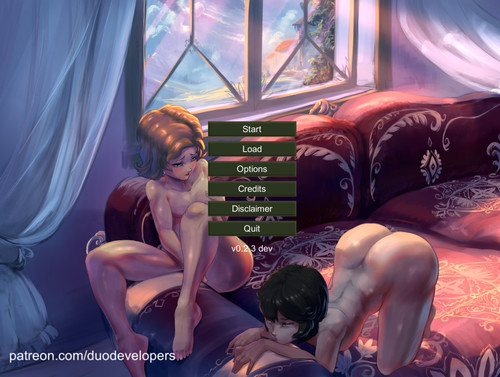 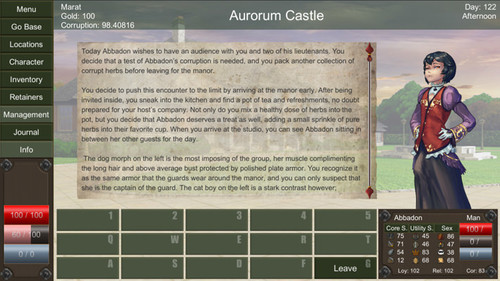 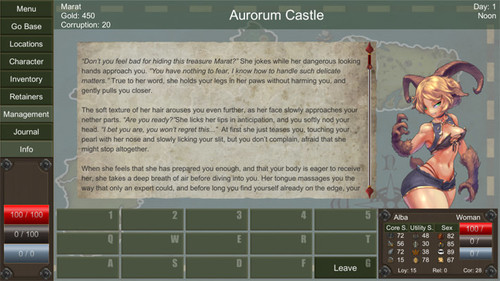 Description:
The game: Debauchery in Caelia Kingdoms (DiCK)
DiCK is a free adult text-based RPG about a MC that inherits the title of a city, few years after a Great Plague scourged the world and transformed a high number of the population in different kinds of beasts and monsters.
Your character has to travel through a world populated by monster-girls(and boys) to reach the capital city, to make his new title official. Along the way you will be confronted with dilemmas and choices, followers will join you, putting their fate in your hands, and ultimately you will shape your city, and the whole island. We have planned 6 endings, 3 for a pure route, and 3 for a corrupting one. We aim to allow the player to customize itself as much as he wants, with different genders, heights, body builds, colours, clothing and hairstyles,while at the same time his choices will change his state of mind and either corrupt him or purify him, so you can play the adventure you want!

Change-log: v0.2.3
Hello guys! First of all thank you all for your support! Here as promised I am releasing the dev build with all the new content I’ve been working this past month and that has been edited by now, it includes: 3 victory sex scenes. For the moment these are generic, but in the future I will add custom ones for each race. The story continues with the first 4 quests of Lucina Texts for the rewards of your slaves, this is something I will keep expanding overtime to have variety. A new dominatrix outfit for Helena! (Dominant Helena only of course) Added a gold cheat in the left bar > menu > cheats. I will keep adding more cheats in the future. And that’s all for this one! The amount of content added is around 23k words (Rewards, sex scenes, quests) and I already had written around 10k for the next month, so you can expect the final 0.2.3 release to be a little bit over 40k words probably! I will soon the next poll for new enemies too, so keep tuned!